Affected families throughout the United States are warning the public about the emergent dangers of illicit fentanyl. Advocates for victims of illicit fentanyl poisoning have been sounding the alarm and pleading for a whole of government response to address this deadly epidemic. As the death toll rises and more families grieve, advocates and affected family members are taking initiative where our government is failing to act.

Illicit Fentanyl is 100 times more potent than morphine and 50 times stronger than heroin. Drug cartels make and supply deadly illicit fentanyl either as a standalone substance, as an additive laced in other dangerous street drugs, such as heroin, cocaine, and methamphetamine, or as substitutes for these drugs. Illicit fentanyl is purposely and deceptively added to other drugs because of its extreme potency, making drugs cheaper, more powerful, more addictive, and more dangerous. Illicit fentanyl has also been identified in counterfeit prescription pills. These fake pills are made to look identical to legitimate prescription pills — such as Oxycontin, Percocet, Vicodin, Adderall, Xanax and other medicines—and have been found in every state in the country. Criminal drug networks are also harnessing the accessibility of social media to push deadly drugs into American communities.

For the first time in our nation’s history, over 100,000 people have died of drug overdose in a single year. Illicit fentanyl further fueled the opioid epidemic, and fentanyl poisoning and “overdose” is now the leading cause of death for adults aged 18-45 in the United States, surpassing suicide, gun violence and car accidents. Fentanyl deaths in America across all age groups doubled from 32,745 fatalities to 62,178 fatalities in the two-year period between April 2019 and April 2021. Over 150 people die every day in the United States from “overdose” poisoning related to synthetic opioids like illicit fentanyl, which means a fentanyl-related death occurs approximately every nine minutes. Tracking of deaths and poisonings has been insufficient and we believe the current data falls short of he actuality of the current crisis.

National Illicit Fentanyl Prevention and Awareness Day is established in remembrance of the loved ones who lost their lives due to illicit fentanyl poisoning, and to acknowledge the devastation this drug brings to hundreds of thousands of affected family members and friends. Advocates and educators will use this day to raise awareness and educate the public about the dangers of fentanyl. This coordinated day of response from multiple fentanyl awareness organizations will include participation by affected families who will share their lived experiences as part of the effort to warn and inform the general public, our
youth and the unsuspecting. This day will be observed every year on August 21, beginning in 2022.

A dedicated website will be launched in April 2022 appropriately titled “FACING FENTANYL” to house all participants and events submitted for the day.
### 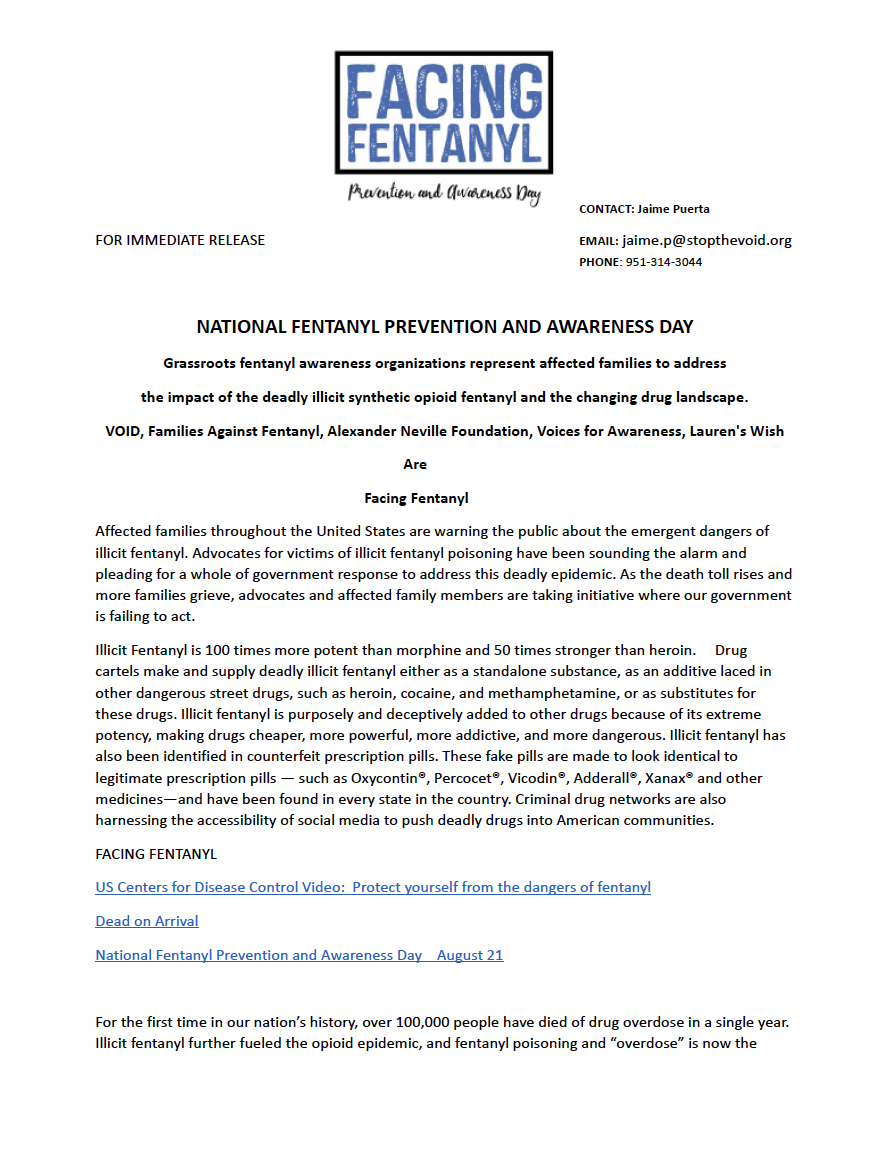